Thomas Chance Morris, famously known by his online handle Sodapoppin, is a Twitch streamer and Internet personality. He is from the United States. Morris has over 3 million followers and over 360 million views consequently making it one of the greatest Twitch followings. He is the guy on Twitch who can stream whatever he wants, and tens of thousands of people will tune in right now to watch. On most days, Sodapoopin streams for 6-8 hours and does not follow a strict routine. He is well-known for his humorous nature and he has had numerous funny moments during his streaming career. Additionally, Morris also has a YouTube channel, which has over 1.09 million members and over 380 million views as of January 2022.

These staggering high numbers makes him one of the greatest internet sensations of the time. Keep reading as we address most common questions asked about him! Sodapoppin started at a time when Twitch didn’t exist and nobody had an Instagram account. Firstly, he started streaming in 2008. A now extinct live streaming platform called Xfire marked his growth. There were not many streamers on the platform before. Hence, it worked to his advantage and he got a lot of views. It was widely seen as a place for gameplay footage and Morris had a flair for the outlandish. His entertaining videos consequently made him well-established. After continuing and gaining popularity for four years, he next switched to Twitch from Xfire in 2012.

Morris started streaming on Twitch in 2012 after leaving Xfire. He was a brilliant World of Warcraft player. For example, he achieved the top rank and drew the interest of more than half of Twitch’s WoW viewers. Morris used to stream other games before moving on to internet gambling. Morris was broadcasting blackjack gaming on casino websites in 2014 and 2015. As a result, he would win or lose hundreds of dollars in a matter of days. Such as how he lost $5000 in May 2015 with 43k viewers witnessing the same.

Morris was a co-owner of Northern Gaming which is a Canadian eSports organisation. However, NRG Esports – controlled by Shaquille O’Neal, Alex Rodriguez, and others, purchased the organisation in August 2017. Morris at last became a member of its ownership group and an advisor to NRG Esports.

Besides this, In October 2017, Morris knocked fellow broadcaster Dr DisRespect out of the H1Z1 Invitational competition. Nonetheless, Morris fell short of the top ten.

He has managed to consistently achieve fame without a doubt. Sodapoppin is the 43rd most followed person on Twitch, as per SocialBlade. He is also ranked 11th in terms of overall Twitch viewership.

Sodapoppin’s net worth is estimated to be at $8 million. He obviously earns the most of his money through streaming on Twitch and posting frequent videos on YouTube. Presently he has approximately 7k Twitch subscribers, which should result in approximately $37,000 in income per month and approximately $460,000 per year. He also has a sizable YouTube following that is 1.09 million subscribers. He routinely receives around 1.5 million views each month on YouTube which easily results in earnings of $5-$6k per month. Since he receives more than a million views a month, it should amount to $60 to $70k annually.

Additionally, NRG Esports must also be paying him as an advisor. He also has his own website as well as a line of merchandise and clothing. Apart from sponsorships/deals, the foregoing profits are however exclusive of the donations he receives on Twitch. Hence, Morris presumably earns around eight million dollars every year.

Owing to the love for his fans, Sodapoppin lets his fans decide which merch goes to the shop through a system of voting. The popular video for the same is up on his youtube channel. His fans can order his merch from https://sodapoppin.shop/. According to the site, The products they offer are all designed by everyday people like the viewer. There are absolutely no limitations on who can use their site. There is zero cost to design and sell while using Spring. Hence, this leaves one free from worries like overhead cost. Some of the most popular merchandise such as pogchamp is also available on Amazon. You can find Sodapoppin on Twitter @Sodapoppintv. He undoubtedly keeps his audience of 631.5k followers entertained on this platform as well! Morris has been a part of Twitter since January 2013.

The platform that especially adds to Sodapoppin’s fame is Twitch. He has over 3.2 million followers here as of January 2021. His profile is https://www.twitch.tv/sodapoppin. Clearly he is one of the most popular streamers there.

Chance was born on 15 February, 1994 in the United States of America. He is now certainly 27 years old. In fact, he started streaming in his teens and quickly rose to fame.

Sodapoppin responded to one of the comments on his videos which said that money was tight as it certainly was not. Therefore, it explains his considerate spending on his car. He has a 911 GT3 RS. The whole car is apparently designed basically to be a road legal race car. The whole aerodynamics is not just functional but also cosmetic. It has a high-revving engine and a transmission that is insanely fast when shifting. Morris especially has a taste for race cars as he vlogged one of his visits to a professional race track in a Porsche GTR. This is understandably his dream car. 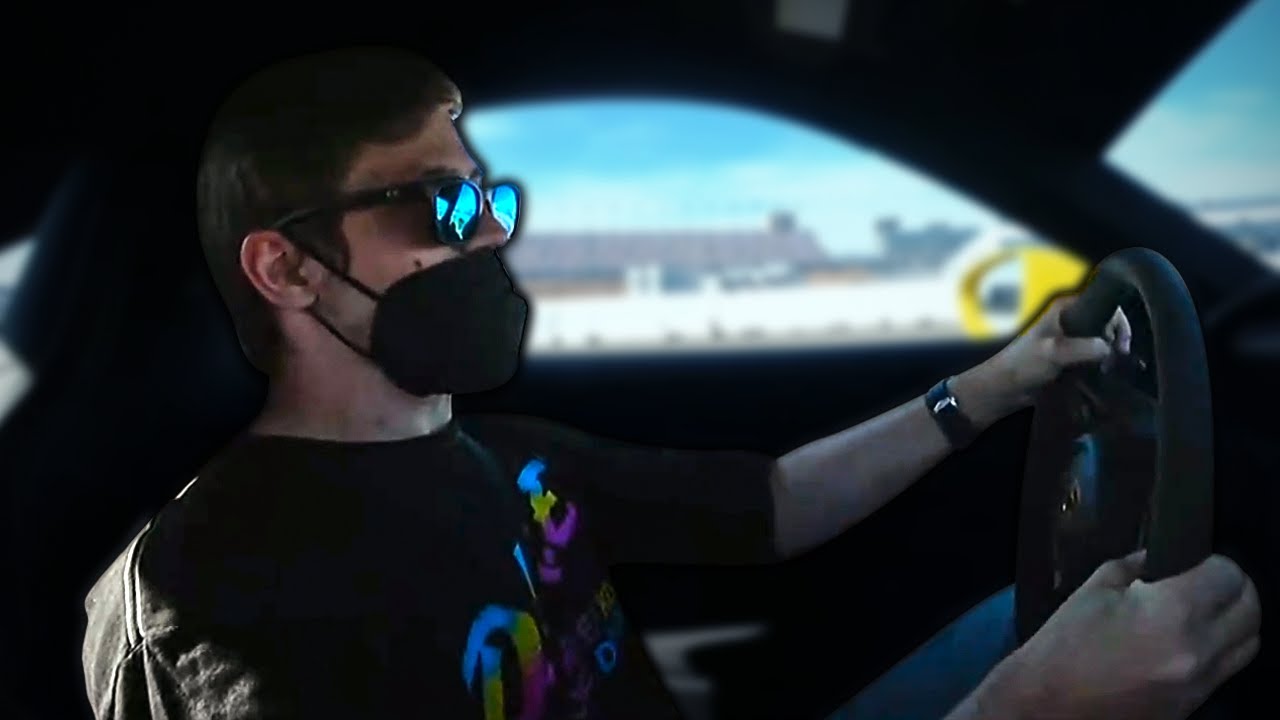 His parents live in Texas – his birthplace. You might have seen his father as he shows on occasion in his streams. He has five siblings as well as a niece and a nephew. There are three elder brothers and two sisters. D-Kane is one of his brothers. BJP Official whose real name is Ryan Wilet is also his brother. In 2019, D-Kane went viral for quitting his job after gaining 1k subscribers on Twitch. Similarly, BJP is well-known for his Grand Theft Auto V gameplay on his Twitch channel. In addition to streaming, he is a lawyer and the co-host of ESPN Radio’s Laying Down The Law.

There exists a reddit community for all things related to Twitch streamer Thomas Jefferson. You can be a part of the 59.4k members at r/sodapoppin. Morris occasionally references seeing comments on his subreddit.

Sodapoppin has maintained a presence on youtube since 11 April, 2012. His videos frequently cross a million views. He has over 1.09 million subscribers as of January of 2022. Evidently, posting videos consistently keeps his fanbase engaged and content. You can watch his hilarious videos at https://www.youtube.com/c/sodapoppin.

Despite being quite active on other social media platforms, Morris does not post on Instagram as much. He goes by the username @sodapoppintv.

Lea May Currier is the ex-girlfriend of Sodapoppin. She is also а Twitсh gаming stаr. In January 2013, she streamed World of Warcraft simultaneously. She goes by the alias of Legendary Lea. An incident occurred a few years after they broke up where Lea got upset by a viewer who kept probing her about Morris. It was a tense environment as she was trying to seriously discuss however was interrupted by the viewer. Mention of Morris infuriated her. It therefore implied that the relationship also ended on bad terms.

Chance has now kept his relationship status private, therefore there is no concrete information about his dating or love life.

Chance recently flaunted his new desktop background which left viewers stunned. It has the same vibe as his room wallpaper. See the pictures below! 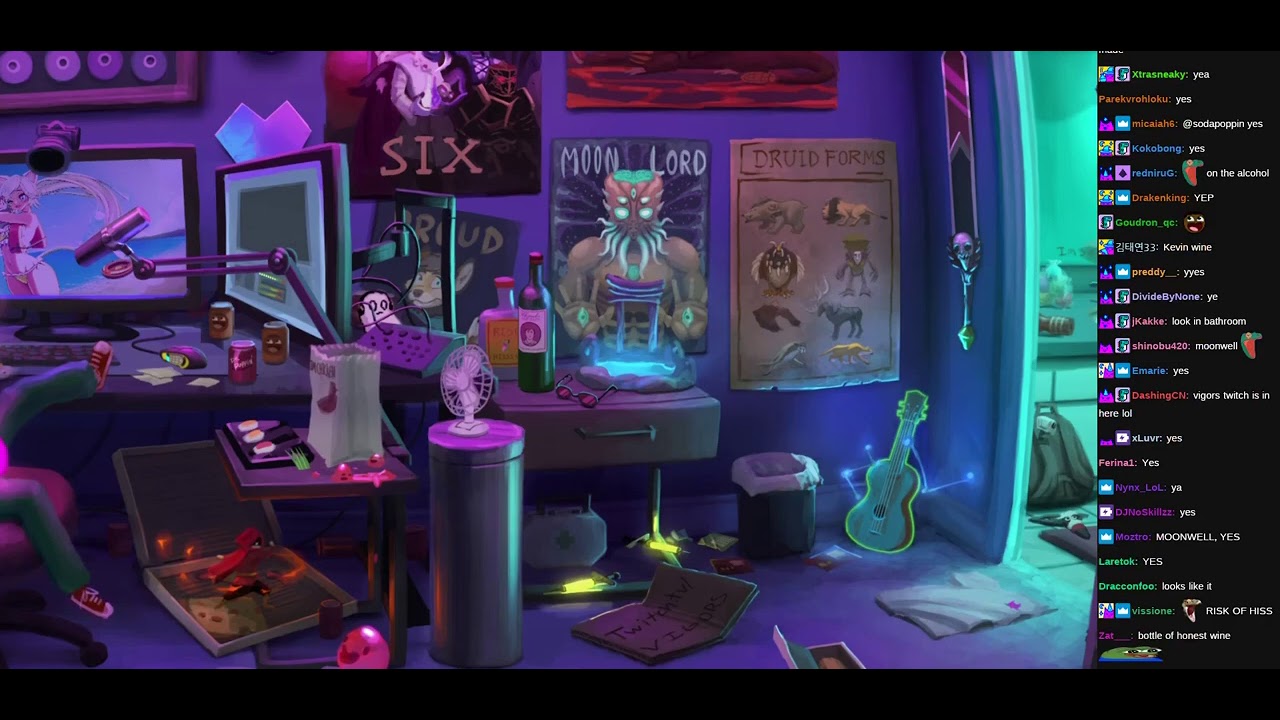 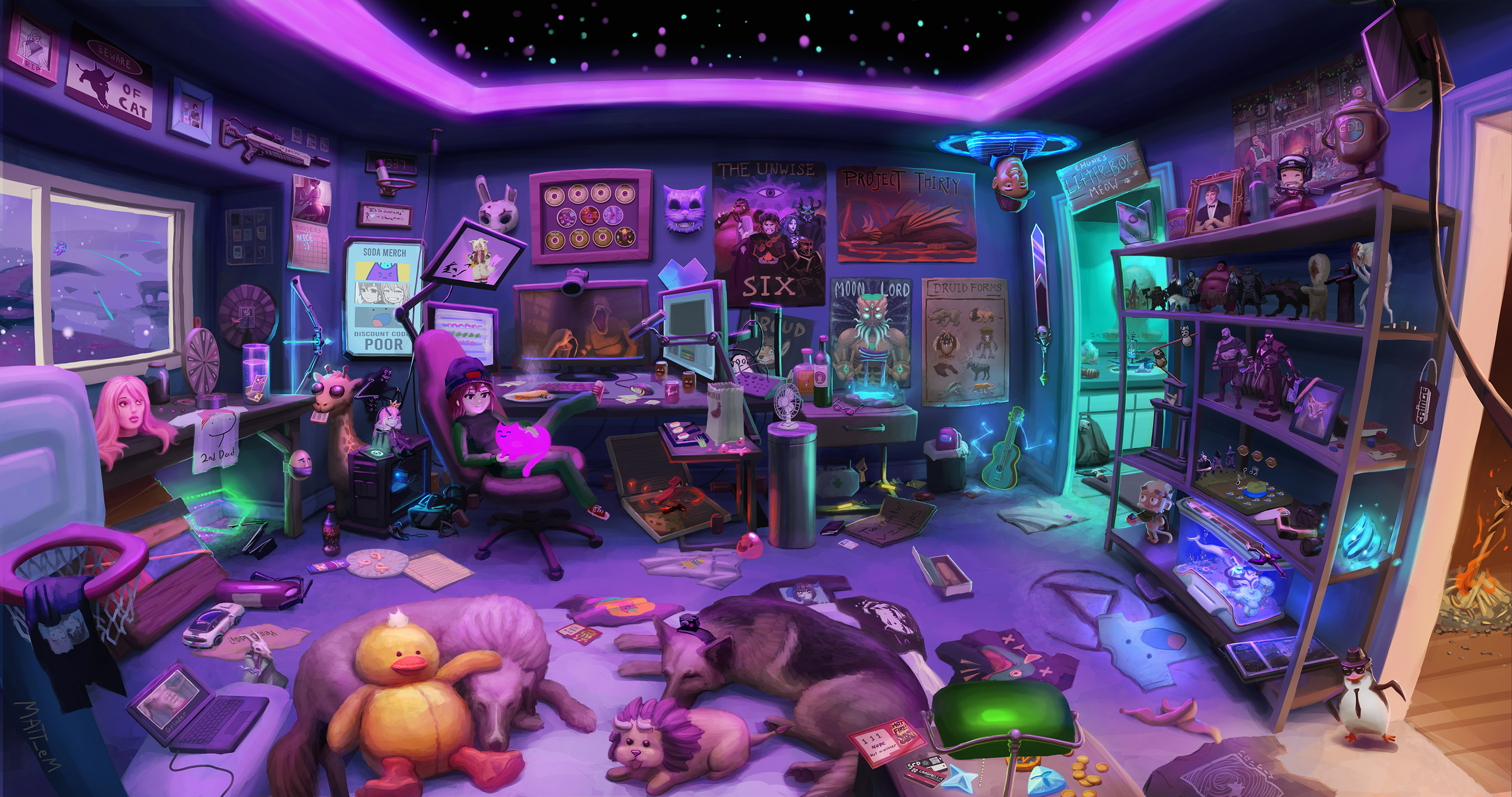 Although Chance is not on Steam, he very generously signed the steam profile of a fan who got diagnosed with cancer. There are other fan-made profiles which upload unedited or uncut bits from his livestream videos.

Sodapoppin, like Kaceytron, has a long history in the streaming world. Despite spending the last eight and a half years on the streaming platform, Morris has now harshly criticised Twitch for its decision to remove Kaceytron indefinitely. On March 26,  Morris voiced his thoughts on Kaceytron’s extended ban. However, this was not in support of the streaming site. He then contrasted the scenario to an employee being dismissed without being informed for how long they will be fired for.

Obviously many Kaceytron fans agree with Morris’ point of view. It would be difficult for her to transition to a new platform because she was already famous on Twitch. The unpredictability surrounding the duration of her suspension will also make it difficult for her to decide on her next moves.

Besides, Twitch does not publicly comment on suspensions or violations of their conditions.

Sodapoppin is one of the most talked-about Twitch streamers due to the numerous funny situations during his live streams. Although h e is one of the platform’s oldest streamers he has been subjected to a great deal of criticism. He  has a distinct personality and a “crass” sense of humour. Twitch has banned him several times for engaging in “hate speech.”

Back in July 2015, he expressed his displeasure with female Twitch streamers who rarely played video games. He believes that female streamers who aren’t skilled at gaming should resort to other sites like YouTube.

Chanc was temporarily suspended in July 2020 because one of his VRchat streams had some questionable “sexual content.” One of the characters in the game was dressed in “revealing” attire. He responded with a snarky apology on Youtube. Nonetheless, comically explaining the cause for his Twitch ban. 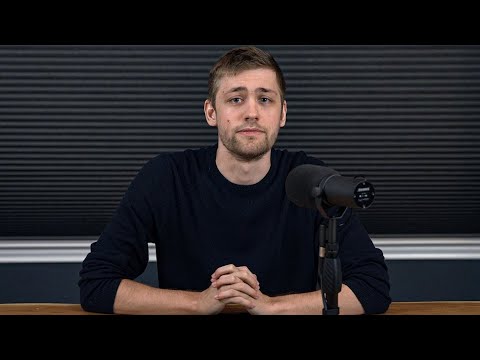 Here we’ve the specifics of SodaPoppin’s gaming and PC: 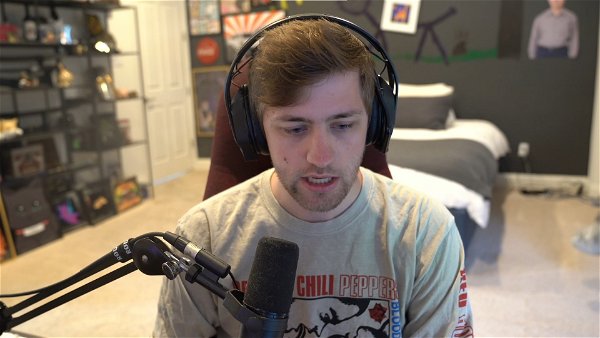 How did Sodapoppin get famous?

Chance began streaming in 2012 and soon rose to prominence as a World of Warcraft player. He was able to get more than half of Twitch’s WoW followers for his streams at one stage. Chance has subsequently gained a reputation for playing a wide range of games, including World of Warcraft, Among Us and others. Chance’s Twitch channel was one of the most popular on the platform in 2018.

How much does Sodapoppin make a month?

As discussed before in the net worth section, Sodapoppin makes at least $37,000 from Twitch monthly. Similarly, youtube must be contributing $5-$6k per month to his income. He would also receive a generous salary as an NRG Sports advisor. In addition to this there is his own line of merchandise. Therefore, it is safe to assume he makes a comfortable living every month.

How did Sodapoppin get rich?

He earns the most of his money through streaming on Twitch and posting regular videos on YouTube. As a result, he earns well and has a net worth of $8 million.

What happened to Sodapoppin?

Chance “Sodapoppin” Morris, whose gaming name is Kevin Whipaloo, declared on Sunday that he is quitting his false occupations and abandoning his fictitious life of crime in GTA. It evidently got overwhelming for him.

Has Sodapoppin ever been banned?

Sodapoppin is the most recent Twitch streamer to be banned. However, it isn’t the first time he has been barred from the network. This fueled suspicion that the cause for the ban was related to a VR Chat stream they did on July 17th, 2020.

Twitch’s Community Guidelines for sexual content on streams are strict. He posted an “apology” video on YouTube explaining the reason for his suspension. It might be because Twitch normally does not come out and explain the reason. Twitch’s stance regarding bans has always been to never officially identify the cause for the ban. This is also likely to be the situation with his removal from the platform.

Why is Sodapoppin banned from WoW?

Because of an inappropriate username, popular Twitch streamer Sodapoppin has been temporarily banned from the Black Desert Online MMORPG. The MMORPG world is mostly dominated by Blizzard’s World of Warcraft.

How much does Sodapoppin make from donations?

Sodapoppin also gets paid through Twitch Bit Donations. In the last month, his top ten bit donations totaled 3150 bits, or $31.5. Hence, his monthly bit donations are anticipated to be approximately $200. This means that he receives around $2,425 in donations per month.

Who first streamed Among Us?

Willard claims that Twitch user Sodapoppin popularised the game Among Us. This happened on Twitch in July 2020. Many other Twitch streamers and YouTubers followed suit, including xQc, Pokimane, Shroud, Ninja, Disguised Toast and PewDiePie, among others.